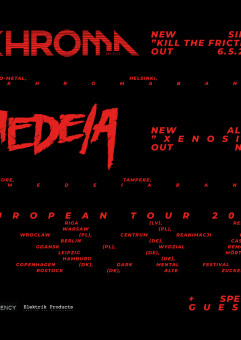 Established in Helsinki in 2010, the electro-metal outfit Khroma conveys the socio-economical decline of our times into an assaulting soundtrack of cinematic atmospheres and ambiences, down-tuned guitar patterns and pulsating trip hop beats. This fusion of influences is further explored lyrically as the band tackles counter-cultural issues of disillusionment, fatalism and despondency.

In April 2016, Khroma released their sophomore album "Stasis", produced and recorded in their Berlin headquarters, to rave reviews and embarked on an extensive European tour, spanning over 10 countries and including 30 shows. Altogether the band has done 10 European tours and several hundred shows.

In 2019 Khroma is preparing the release of their third, yet untitled album. The first single & music video "Kill The Friction", released in May 2019, will showcase Khroma at their most cinematic.

The underground throne holders of Finnish metal, Medeia has stuck to one clear objective since its founding in 2002: creating a fresh, brutal sound rich in content and uncompromising in nature. Following the success of their label debut "Cult" (2008), which also took Medeia around Europe alongside The Ocean, Medeia released the final installment of their thematically twisted trilogy in May 2011, dubbing it Abandon All.

Medeia has made a point of bringing their trademark jaw-dropping energy to audiences across Finland and beyond, touring relentlessly and playing shows alongside such acts as Ozzy Osbourne, As I Lay Dying, The Dillinger Escape Plan, Between the Buried and Me, Entombed, Animals as Leaders, Decapitated, Raised Fist, Terror and Insomnium. They released their fourth album, Iconoclastic, during the band's massive European tour with Children of Bodom in late 2013. The tour consisted of 49 shows in 25 countries and concluded with an eleven-show Finnish tour in 2014.

Immediately after the acquisition of the new lead singer Frans Aalto, Medeia began making grand plans for an album that would be known as their crown jewel. The record turned out so ambitious that it kept the band in the studio for nearly two years, pushing the main song writer Samuli Peltola to his limits. in February 2019 the wait is over, and Medeia is ready to proudly present their own altered "Genesis", released in February 2019.